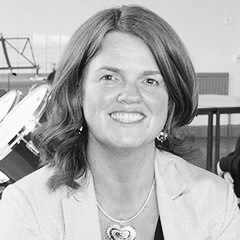 Janet has been a teacher and headteacher for over 30 years in schools in England and Wales. She is a Computer Science graduate and is passionate about harnessing the use of technology to enhance teaching and learning.

She has chaired and co-chaired Task and Finish Groups for the Welsh Government into the future of the Digital Classroom and the future of ICT.  She chaired the National Digital Learning Council for Wales from it’s inception in 2012 until 2017 and served as a member of the Education Minister’s Practitioner’s Panel for a number of years.

She is currently working as an Executive Headteacher at Cadoxton and Oak Field Primary Schools in Barry, South Wales. Cadoxton is renowned for it’s work and support to other school’s in digital learning, acting as a pilot and case study for initiatives. Janet has developed partnerships with Lego, Apple and Microsoft to benefit her own school and the work of others. The school is also an Ashoka Changemaker School.

Janet was awarded the OBE for services to education in 2014 and was named in the top 50 Global teacher list in 2015. Janet is passionate about embedding the principles of 21st Century learning in it’s truest form in schools, leading transformation in the use of learning spaces, pedagogy as well as student leadership and digital learning. Cadoxton school was showcased in the “Smarter Spaces” campaign and has won various awards, most recently the Welsh Teaching Award for Wellbeing, Inclusion and links with the Community as well as the Leading Wales Award for Outstanding Leadership in an organisation.

Janet is a facilitator for Leadership courses and is a regular keynote speaker. Her schools are Trauma informed, work closely with families and has worked with the charity, Fareshare to ensure that "no child goes hungry”.  She is currently working as an associate Headteacher member of the new Welsh National Academy for Educational Leadership. She also has a wealth of experience in providing support to schools in the UK and overseas.